African Charter Article# 24: All peoples shall have the right to a general satisfactory environment favorable to their development.

Summary & Comment: Uganda has embarked on a two year project to develop and adapt seed varieties that grow well in the local environment. The research is funded by the Bill and Melinda Gates Foundation. AB

Uganda has embarked on a two year project to develop and adapt seed varieties that grow well in the local environment.

Dr. Peter Seruwagi, the head of Horticulture programme at the National Crops Resources Research Institute (NaCCRI), Namulonge says the multi million project which is called ‘Vegetable breeding and seed systems‘ is funded by the Bill and Merinda Gates Foundation through the World Vegetable Centre. “We want to come up with seed varieties that are of good quality for improved productivity as well as consumption,” he said. Seruwagi says most imported seed varieties especially for horticulture do not do well in the Ugandan environment. The project will cover tomatoes, egg plants, onions and other vegetables. “It is not true that all the imported seeds are of low quality. They may be of high quality in the country of origin, but due to climatic differences they fail to do well here. We have received several cases where these seeds fail to germinate,” he says.

The Institute has organised a seed fair where Ugandan seed companies will exhibit their products. The seed fair, with a theme ‘Vegetables for health and wealth,’ will take place on December 12, 2008. “As part of the project, the seed fair aims at promoting the use of quality seeds and increased vegetable production for income generation,” he says.He said the market for vegetables has grown widely following the benefits they contain. “Eating a wide variety of vegetables means you are more likely to get all the vitamins and minerals that are important to your health,” Seruwagi added.

It is a well known fact that some imported seeds, even of the highest quality, will not germinate and develop into healthy plants, due to climatic or edaphic(soil)  constraints.

For that reason some comments on our “Seeds for Food” action doubt about the positive effect of the seeds we send abroad to development projects.

It goes without saying that we are conscious about the right choice of the species sent.  But even if not all the seeds offered for free to projects will germinate or develop into healthy plants, the percentage of them germinating and producing fresh vegetables and fruits is a big step forward for the recipients, because “Eating a wide variety of vegetables means you are more likely to get all the vitamins and minerals that are important to your health“.  And even the non-germinating seeds will always play a positive role, being organic matter that will be decomposed in the soil and thus contribute to the organic content of that soil.

We appreciate very much the efforts of  the “multi million project which is called ‘Vegetable breeding and seed systems‘  funded by the Bill and Merinda Gates Foundation through the World Vegetable Centre.  We expect that the outcome will be : an interesting selection of excellent varieties of seeds, producing bigger plants and better tasting vegetables.

However, the question remains if these selected varieties will be produced in Uganda (and in the other developing countries) at such a large scale that sufficient seeds will be offered for free to the poor rural people.  Or will they be produced by companies, putting commercial varieties of seeds on the market which again will be too expensive to be easily purchased by smallholders.

We remain convinced that offering free seeds of tropical fruits, collected from all the juicy fruits we are eating in developed countries, to small-scale farmers in the developing countries, is a valuable contribution to their sustainable development.  Taking into account the climatic and edaphic conditions at the sites or regions of the developing countries, where we are sending the collected seeds of vegetables to, is also a major step in that direction.  Once those smallholders have these free seeds developing in their kitchen garden, they are in a position to select seeds from the plants they are growing.  They will not be dependent anymore on “donations of seeds”.  They will be able to enhance bit-by-bit their annual income by taking the surplus of vegetables and fruits to the local market.  And at the end of the day they will earn sufficient money to buy the “top quality seeds” selected by their national experts and produced by the commercial seed companies.

In the meanwhile, we continue to collect seeds of vegetables and fruits and we offer them for free to every development project wanting to lay-out kitchen gardens, in particular in the drylands.

Is this working well ?  Ask the people who received already some seeds … or look at the pictures of newly installed kitchen gardens, even those in the Sahara desert.  Seeing is believing, isn’t it ? 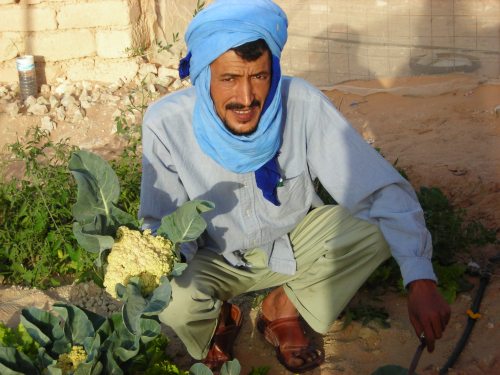 2008-04 – Engineer Taleb BRAHIM taking care of the right application of the seeds in the harsh climatic and edaphic conditions of the Algerian Sahara.